Ergonomic solutions for your livestock and you.
Serving Maryland and Virginia.

hoofprints – a note from Anne 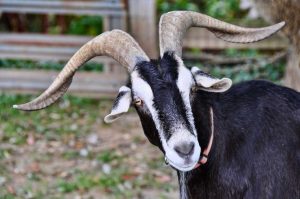 “After my first few years on the farm I discovered I was sub-consciously asking myself at any given location (including office buildings) ‘Is that goat-proof?’ It was then that I realized that I had a peculiar insight into farm structures, safety, and animal traffic flow.  I credit Mr. Newman Goat with this gift and forgive him all past destruction of vehicles, fencing, my back porch,  UPS packages, and more.  hoofprints is not so transparently a tribute to the goats in everyone’s life.” 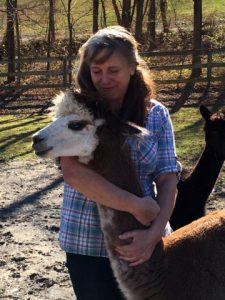 Anne is a long-time farm owner and a professional shearer.  She not only has worked her way through countless problems on her own farm over the last decade and a half, but she has observed all manner of issues at the hundreds of farms she shears at every year. Anne received her degrees from Yale University and University of Michigan in Linguistics, and worked for many years as a software and web developer.  She much prefers, however, to put her mind to problem solving in barns where both animals and people will reap instant benefits. 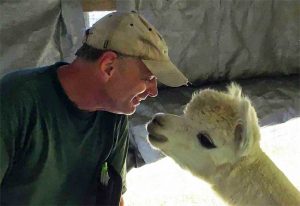 Dave with Chex, one of his clients.

Dave grew up and worked on the family farm in eastern Pennsylvania until graduating from Lehigh University to pursue a career in Electrical Engineering. He worked for many years in the commercial nuclear power industry and recently moved to Maryland after retiring from his position as a project manager. Dave likes to fix things and finds that helping to resolve issues confronting farm owners is a rewarding way to reconnect with his roots in the farming community. 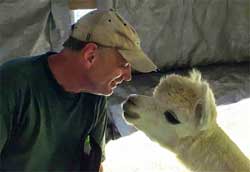